My total gastrectomy was 5 months ago today.  It doesn't really seem like that long ago.  The other day, I caught myself telling someone it was almost 4 months and then realized it was almost 5 months.  Life has pretty much returned to "normal"...or at least a new normal.  I'm still hoping that my energy level continues to increase, and I think it will, but I could live with where I am now if I had to. 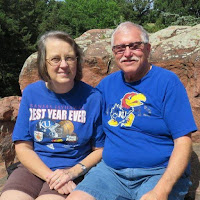 I wrote about our long weekend travels the first of July.  Last weekend, we had another travel weekend.  One of Keith's best friends got married in Sioux City, Iowa.  Since we would be so close to South Dakota and Keith has never been, he wanted to go up there and take some pictures.  When I looked at a map, I realized part of South Dakota we would be close to was Vermillion, where my best friend from college lives.  So, we left KC a little after 4:00 on Thursday, drove to Vermillion, stopping for supper along the way.  We got there between 9:30 and 10:00.  Friday morning, we picked up my friend around 9:30 and went to Devil's Gulch, Palisades State Park and the falls at Sioux Falls.  We were then to Sioux City for a pre-wedding dinner Friday night.  After dinner, we played games and lost track of time, so didn't get back to the motel until midnight.  Saturday morning, I slept in until about 9:30.  We then headed back to Vermillion and then to Yankton to see the bridge and eat lunch.  We didn't have a lot of time since we got a late start and wanted to be back to Sioux City around 2:30 to get ready for the 4:30 wedding.  It was a small wedding, just close family and friends.  After the wedding, we had dinner at a restaurant and then back to the house for more games (requested by the bride's teen daughter).  We had another late night, slept in Sunday morning and hit the road for home.  At St. Joseph, Missouri, we jogged over to Kansas, hitting a couple of things in Atchison and Leavenworth for kansastravel.org.

It was a full weekend.  I was tired, but did OK for the most part.  I did have a minor episode at Palisades State Park.  We had walked down a short trail to see one of the rock formations.  I got hot and tired and not feeling well, so decided to head back to the car.  Before I could get very far, things quickly got worse.  Back in high school and college, I had some problems with black out spells.  Doctors were never able to determine what caused them.  They've continued occasionally in adult life, but not very often (like every few years).  Well, as I was trying to head to the car, I felt like I was going to black out, I needed a bathroom and I thought I was going to throw up.  I had to sit down on a rock, bench, whatever, 2 or 3 times on the way to the parking lot.  I tried to throw up, but nothing would come up.  When I wasn't going to black out so I could walk, I walked quickly so I could get to the primitive toilets which were fortunately in the parking lot. I got through it and made it to the toilets just in time, but there was a moment I was starting to panic and wondering how I was going to get off the trail and back to the car.  I was cautious the rest of the day and didn't do much walking.

After two short weeks at work, I had a full week this week.  Monday and Tuesday I had evening meetings at 6:00 and 6:15, so worked straight through.  I was at the church for 10 hours Monday and 9 1/2 hours Tuesday.  I was obviously tired at the end of the day both days, but I wasn't drop-dead tired.  That actually told me that I'm doing a lot better.  Just a few weeks ago, I would not have been functioning at the end of a 10 hour day.  I ended up putting in basically 39 hours this week, the most, by far, I have done since surgery.
Posted by Linda Stokes at 10:56 PM