I'm way behind.  It has been 3 months since I've posted.  I've intended on posting several times over the last 3 months.  I've thought about what I would say several times.  I've just never actually sit down and typed anything.  So, I am doing that, today, now!

By August, I had lost enough weight (about 55 pounds) that some of my clothes didn't work anymore, or at least looked baggy.  I was thinking about going shopping for some new clothes, but then discovered I had some in the upstairs closet that I had "outgrown" prior to surgery, but hadn't gotten rid of.  I was enjoying my newfound wardrobe.

The first of September, we went to Mackinaw City, Michigan (my husband's hometown) for vacation.  My daughter and son-in-law went with us.  It was my son-in-law's first trip to the area and my biggest trip post-TG.  About 2 days before we left, I decided that I really should buy new jeans before we went.  The newfound wardrobe had included dress pants, but not jeans.  At home, I was still wearing a lot of shorts, but in northern Michigan, it would be cooler and I would want jeans.  While I was still able to cinch my jeans tight enough with a belt to wear around home and to work where I'm sitting at a desk most of the day, they wouldn't be as comfortable when we were walking around most of the day.  It took 3 stores, but I finally found some jeans that fit.  I had went from a size 18W down to a 14, the same size I had worn for much of my early adult life, but not anytime recently.  Having jeans that fit felt wonderful.  At that point, I didn't want to go back to wearing ones that were loose.

If you've ever been to Mackinaw City or Mackinac Island, you know the area is known for fudge.  There are fudge shops every other store.  The same company will even have two shops within a block of each other.  I learned while we were there that I can still eat fudge, caramels and other candy that is just too hard to resist.  I just have to pace myself.  I ate a lot of sweets on the trip, but I would have one piece and then an hour or two later have another piece, etc.  I never got sick by eating too much.

Part of the point of going to Mackinac over Labor Day weekend is for the Mackinac Bridge Walk. It's the one day you can walk across the 5 mile long suspension bridge.  Keith and I did it in 2011, the first time he had done it since he was a kid.  Mary and Nicholas wanted to do the walk, so the 3 of them did.  I decided that I wasn't up for that long of a walk and especially not for leaving the hotel at 6am, so I stayed behind and took pictures.  Mary ended up live streaming the walk on Keith's facebook page.  If you're interested, you can watch it at https://www.facebook.com/210773555600457/videos/1752567588087705/?fref=mentions and/or view Keith's pictures from the walk at http://www.mightymac.org/2017mackinacbridgewalk/index.htm 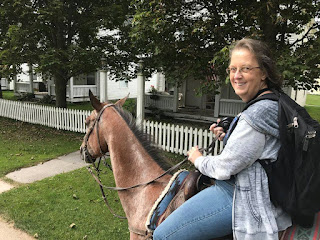 About the end of September or early October, I suddenly realized I was working full days regularly.  Because I have great flexibility in my job in regards to what time I get in and what time I leave, it had sneaked up on me and I had been doing it for a week or two before I really realized it.  I was also going for a walk or doing other activities in the evening, after putting in a full day, without being totally exhausted.  So, it took 7 months, but I was pretty close to "fully recovered"...whatever that means.  That doesn't mean there aren't still moments when I don't feel good, but in general, things are really good.

Before my surgery, Keith and I played tennis for exercise.  We hadn't played since my surgery, but finally played 3 or 4 times in October.  Then life got busy and crazy (normal) and the weather got cooler and we hadn't been playing or walking or doing any exercise.  I made a conscience decision to try to do better and this weekend has been nicer and we went for a walk on Friday and then played tennis today.

As I'm now down about 70 pounds. I am finding more and more of my old clothes that don't work anymore.  I'm enjoying buying new, although I still haven't done a ton yet because even though my weight loss has slowed down, it hasn't stopped and I don't want to spend a lot of money of clothes that I may not be able to wear in another 6 months or a year.

I'm looking forward to Thanksgiving this week.  This will be another test for me as I try to not put too much on my plate and not over eat.  We'll see how it goes.......