It's been one year since I wrote these words:

I'm sitting here on the eve of my surgery. I'm freaking out. I can feel my heart rate accelerating. I try to take deep breaths to relax and stay calm. How did I get here? Am I really doing this? Am I really having my stomach removed in less than 12 hours? What will the rest of my life be like? There's no turning back. (View the whole post here)

I had no idea what the future would bring. I was scared, probably more scared than I've ever been in my life.  The year hasn't been easy, but in general times it hasn't been as bad as I feared.  I had set myself up for the worst.  There have been bad times, but the good times have far outweighed the bad times.  I've been blessed.  Some people have a rougher time than I have.  I don't understand the difference.  I don't feel like I have done anything in particular, but I had a great surgeon (Dr. Mansfield at MD Anderson), and I do try to listen to my body, eat every 2-3 hours (sometimes only an hour), eat protein every time I eat and keep hydrated by drinking mostly unsweetened iced tea, water, and smoothies.  I have a smoothie that I make myself (I don't like the store bought ones and they don't always settle well) almost every night as I found it often settles better in the evening than food does.

My smoothie "recipe" is simple: ice, 100% fruit juice and/or milk (I originally used all juice, but have recently been using a combination of juice and milk), whey protein powder, Greek yogurt, frozen fruit.  Blend. 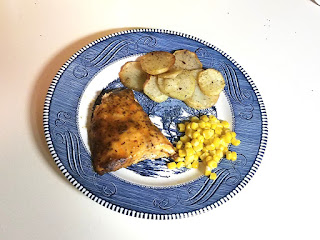 The amount of food I can eat in one setting keeps increasing.  Sometimes, like tonight, my plate looks like a real person, eating a real meal.  This was my supper tonight. I ate everything on my plate.  When eating frozen fish fillets prepared at home (this one was salmon), I can pretty consistently eat the entire thing.  Potatoes are a staple for me, these are sliced and coated with olive oil and garlic seasoning and then baked in the oven, along with the salmon which was preseasoned.  I only started doing corn a couple of months ago, but it has been doing OK.  I haven't really encountered anything I can't eat at all, but there are things I didn't try for months and corn was one of them.  I still don't do a lot of it or salad or bread, but I can eat any of them.  I mainly just don't want to fill up on foods like bread or lettuce that don't supply me with protein or many other nutrients.

I wish I could say that it was always easy and there weren't surprises, but that's simply not true.  Sometimes after eating there's a few minutes that I don't feel good.  I can't really describe it, but things just feel a little out of balance.  It usually isn't severe.  It seldom lasts long.  It doesn't happen all the time.  I just live with it.  It's not a big deal.  I don't know if this is something that will be part of the rest of my life or not.  I do know it happens less often than it did 2 months ago when it was happening less than it was 6 months ago.  So I'm guessing it may totally go away at some point or it may always be there occasionally.  Only time will tell.

It had been a long time since something hadn't set so badly that it came back up.  That was until last night.  I had some peanut butter filled pretzel nuggets for a snack.  Everything seemed fine at first, then I started not to feel well.  I don't want to be too graphic but I want to tell it like it is for those who might be anticipating or recovering from a TG.  It took two trips to the bathroom with it coming out of both ends before I felt better.  But once it was over, I was fine.  It would be easy to say that I just shouldn't eat the peanut butter pretzels, but I had some both Friday night and Saturday night and everything was fine.  I didn't feel the least bit sick then.  This is one of the mysteries of life post total gastrectomy.  You never know what is going to bother you one day that didn't bother you another day.

My weight seems to be stabilizing.  I've been right around 163 (162.7-163.4) for 6 weeks now, down 80 pounds from the 243 I weighed going into surgery.  It is a weight I am very happy with and think I look good at.  I will be thrilled if this is a weight that I maintain and won't be concerned about trying to gain weight.  Actually, wouldn't want to gain any more than 10 pounds or so and if I end up losing another 10 pounds that would be OK too.  I'm basically where I want to be.

Here's to one year of life without a stomach.  Hoping and praying the second year is even more uneventful, which I am expecting it will be.
Posted by Linda Stokes at 10:35 PM