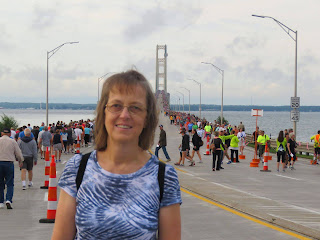 Two years ago today is when I had my stomach removed.  The past year has been a good year.  I'm in a good place.

Here's some highlights of the year: 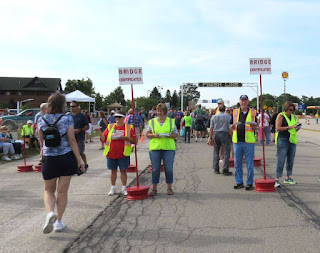 We went to Mackinaw City, Michigan in September.  Mackinaw is my husband's hometown and he has a website devoted to the region mightymac.org.  One of the main purposes of the trip was to walk the Mackinac Bridge on Labor Day.  It is a 5 mile long suspension bridge connecting the upper and lower peninsula.  The entire walk ends up being about 6 miles.  I'm not someone who does much exercising and when I do go for a walk, walking a mile or two is pretty much all I do,  but I did the 6 miles with no difficulty.  I had also walked the bridge in 2011, but I had a stomach then, so it was totally different.  Last year we were there at the time of the bridge walk, but I did not walk; it was too close to surgery.  But this time I thought I could do it and I did. I did make a point of taking snacks and a water bottle with me. 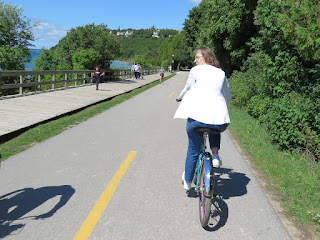 I was a little nervous about both of these adventures, but I had no trouble with either of them.  My tag line when I posted the pictures on Facebook was "no stomach, no problem!" 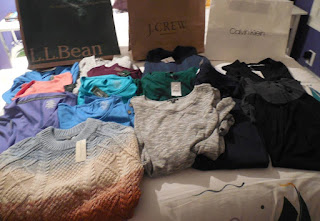 In October, we made a trip to Maine to visit my brother-in-law and sister-in-law.  I had fun shopping at the LL Bean Flagship store in Freeport and the J Crew and Calvin Klein outlets in Kittery.  I might have went overboard on purchases, but on the other hand after losing 85 pounds, I still hadn't really replenished my wardrobe, so I had a good excuse.

Which brings me to my weight.  I have finally stabilized.  After losing 1-2 pounds per week for the first year, from my appointment at MD Anderson in January 2018 to my appointment in January 2019, I only lost 8 pounds.  And I think I lost 6 of those pounds as a pound a month in the first six months and just 2 pounds in the last six months, so I would call that pretty stable.  Because I was overweight going in, I feel really good about my weight at 157.

My follow-up appointment in January was a good appointment.  In general terms, all my blood work came back with good numbers.  My BUN number was a little high which could mean I have some dehydration.  It wasn't significant, just a little. They did suggest more water and/or less caffeine.  As I've mentioned before, iced tea is my go to drink and I don't really want to give it up.  What I've started doing is making two pitchers: one caffeinated and one decaf.  I drink the caffeinated during the day and the decaf in the evening.  I've never felt tea kept me up at night, but having decaf in the evening I figure is a good idea anyway.

My blood pressure was also a little low (99/67), not horrible, but not great.  If you recall, my blood pressure was a little high going into the surgery (ever since I got diagnosed with breast cancer and then CDH1) and I went into aFib after surgery, so they put me on Metoprolol tartrate.  The surgeon's speculation was that I may need to lower the dose, partially because of the weight loss.  I finally got around to calling the cardiologist today and although I'm due to go in March, they can't get me in until June.  But I talked to the nurse and we're going to go ahead and cut the dosage in half and see how I do.

Those two things were both really minor.  I continue to get an excellent report at my surgeon's visits because I am doing great!  I really am doing better than I ever expected and better than many of the people that have this surgery.  Dr. Mansfield said he wanted to see me again in a year, but after that, I would probably "graduate" and not have to come back any more.  That sound great to me!

Happy Two Year Anniversary To Me!