Sunday, June 30, Lenexa United Methodist Church celebrated their 150th Anniversary, being founded in 1869.  This has been my church since 1983 and I have been on staff as Business Administrator since 2004.  As Business Administrator, I am the staff liaison to the Records & History Team who was responsible for planning the celebration weekend, giving me a major role in the planning and carrying out of the celebration.  Everything went really well and everyone seemed to have a great time.  We had many former pastors, descendants of former pastors, former members, and descendants of founding members come for the celebration. 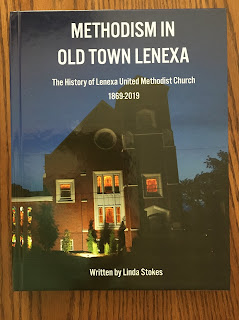 In case the celebration wasn’t enough, I decided to write a book.  Actually, when I started, I didn’t know I was writing book.  I was just trying to put together the previous histories that had been written (all of which were just a few page handout), consolidate and expand them, and add pictures.  None of the previous histories had included pictures.  Next thing I knew, I was writing a book.  Methodism in Old Town Lenexa: The History of Lenexa United Methodist Church 1869-2019 ended up being a 200 page hardbound book with Table of Contents, Glossary, and Index with almost 300 pictures, and included bios of all 70 former pastors.  The previous histories had included very little, if anything, about the former pastors, they had mainly been a list of names and dates served.  I made them come to life.

The planning of the celebration and the writing of the book took over two years.  The amazing thing as I look back, and the reason I’m including it here, is that this whole thing culminated just over two years after I had my total gastrectomy.  My gastrectomy was on February 21, 2017.   I returned to work part-time six weeks later in early April.  As I look back, I’m not totally sure when I started compiling all the previous histories and information we had into a consolidated history to create a starting point, but I think it was either just before or just after surgery.  I actually think I may have started at home during recovery before returning to work part-time. You would think I would remember, but I don’t.  I didn’t return to full days until September.  Within a couple of months of doing that, I started working on a first draft of what would become the book, even though I didn’t know it was going to be a real published book at the time.

In retrospect, I’m just amazed that I pulled off this major event that took lots of time and effort on the heals of having major, major, surgery.  Not only can you lead a normal life after total gastrectomy, you can apparently go beyond normal and commit crazy amounts of time to a project.