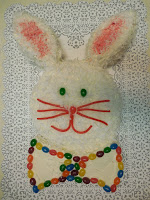 Today was the first major holiday since my surgery and in my family Easter is a major holiday.  Started the weekend yesterday with my daughters and I making the annual Bunny cake that Easter dinner just isn't complete without.

While making the bunny cake, I couldn't resist doing the typical of eating a few jelly beans and one piece of pull-n-peel Twizzlers.  My second experience of having a little bit of candy and I did totally fine.  Later in the evening, just a few minutes before bed, I had a whole pull-n-peel.  That was probably a mistake.  I didn't feel horrible, but I didn't feel great.  I need to remember candy in very small quantities, but sometimes it's so hard!

After the bunny cake making yesterday, we went to a Royals baseball game with friends.  That worked out fine.  It was an evening game.  We left the house at 5:15.  I ate supper before we left.  I took snacks with me to the game and ate string cheese and pretzels earlier in the game and protein bites later in the game.  The peanut butter and chocolate protein bites are a new snack that I just purchased at the grocery store on Friday.  I was looking for something easily portable, but with protein.  They seem to fit the bill.  The game was made much easier with the parking pass for the lot right next to the stadium.  I had been concerned about having to walk a long way, but that was a nonissue.

Many of those there were ones that had gathered at a restaurant 3 nights before we left to MD Anderson for surgery to say goodbye.  Most of which I had not seen since returning home from surgery.  It was good to see everyone.  There were obviously lot's of questions about how I'm doing and specific questions about how I'm coping as this is something that no one really understands.

Being the first big dinner since surgery and not being in my own home, I was cautious about the things I put on my plate.  I mainly wanted foods that I've had before or at least I felt were pretty safe.  We had the traditional Easter ham.  I actually hadn't tried ham yet, but I've had pork chop and pork ribs, so I felt pretty safe with the ham.  I actually enjoyed the ham a lot.  It was very tasty.  Seemed to settle very fine and I enjoyed it being a meat that I haven't been eating all the time, mainly chicken or fish.  I enjoy chicken and fish, but I'm growing tired of them.  I enjoyed the ham so much that I asked to bring some leftovers home and will probably get 5 or 6 meals out of what I brought home.

I also had a little mashed potatoes (although I didn't eat too many since they were skin on and I found it difficult to separate the skin), cheesy potatoes, German potato salad (we like potatoes in this family), macaroni and cheese, asparagus and part of a roll.  I obviously didn't have much of the various potatoes or macaroni and cheese, but enjoyed most everything I ate.

I haven't had a chance to try many desserts yet because I don't want to experiment at a restaurant and I don't want to make a whole dessert at home to just sample a small amount and my husband doesn't eat much dessert as he is diabetic.  I decided today was an opportunity to be able to sample multiple desserts and brought home some of my bunny cake, a piece of a German cake, and a sugar cookie.  I'm obviously not going to try them all at once, but I can try a little of each one on different days and see how it goes.  That should give me a pretty good understanding of my ability to do desserts.  Tonight, just a few minutes ago, I tried a small piece of the bunny cake.  It was good.  I think I'm going to be OK.  I've been fortunate so far and haven't experienced dumping syndrome.  I hope to keep it that way.

I hope everyone had a wonderful Easter if that is a holiday you celebrate.  I know it was a good Easter for me.
Posted by Linda Stokes at 9:22 PM