I am a huge Kansas Jayhawks basketball fan.  As such, I couldn't resist the chance to watch my Jayhawks who were playing in Kansas City (where I live) in the Regional Final of the NCAA Tournament for the chance to go to the Final Four.  So on Thursday night, as the Jayhawks 32 point victory over Purdue was coming to a close, I got on StubHub and bought tickets for Saturday's game against the Oregon Ducks.  I purchased tickets for my husband, adult daughters and brother also, since we all have been watching the tournament games together.  I was excited to be going to the game, but nervous about if I was really up for it or if I was making a big mistake.

The game itself did not go as expected or as we would have liked.  After scoring over 90 points in each of our first three tournament games and winning each contest by at least 20 points, we couldn't hit shots and Oregon couldn't miss.  Our comeback fell short and we went home again after the Elite 8 rather than going on to the Final Four.

However, the outing was a success.  I carefully planned out the schedule, what I was doing about eating and drinking, all things I'm going to need to continue to do on future adventures.  Even though the game wasn't scheduled to start until 7:30, we left the house a little after 4 because we wanted to get there in plenty of time and didn't know how long it would take for traffic, parking, picking up tickets, getting into the arena, etc.   We got downtown shortly after 4:30 and dropped my daughter off where they were distributing the StubHub tickets.  Turns out inviting my brother was a really good idea.  He works less than two blocks from the arena, right on the other side of the entertainment district where KU was having a pep rally at 5:00.  His parking garage was closed for event parking, but as an employee he could still get in and it was free.  So, we had close parking and it was FREE, how cool is that?!?  I had picked up a Smoothie with whey protein that I was drinking on the way downtown and planned to continue drinking until I was finished or about 5:30.  When I was told by the security officer that I couldn't bring the drink in to the entertainment district for the pep rally, I accepted it and planned to stand over to the side.  My daughters, however, would have none of that and went and explained how I needed to have the drink for medical reasons, how I couldn't drink it fast, etc.  When you say "she just had her stomach removed", you get some attention.  He signaled me in.  I thanked him.  We enjoyed the KU cheerleaders and pep band at the pep rally, along with hundreds of other KU fans. 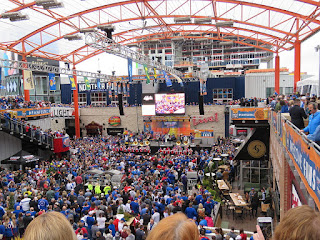 Since we were parked in the garage right across the street, after the rally we were able to go back to the car and retrieve the food I brought in a cooler.  While waiting in line for the doors to the arena to open (they opened at 6pm), I ate the rotisserie chicken breast and slices of cheese and crackers I had brought.  Others in our group would get supper once inside the arena, but I suspected the concession stand choices did not fit with my diet.  We were to our seats by 6:15 and about 7:00 I went and purchased a bottle of water which I drank until about 8:30.  Then about 9:00, I had the string cheese and mini-pretzels that I had in my purse.  It all worked out, I was able to eat and drink pretty much on schedule.  The outing was a success!

Just wish the Jayhawks would have won!
Posted by Linda Stokes at 8:38 PM

Email ThisBlogThis!Share to TwitterShare to FacebookShare to Pinterest
Labels: Eating